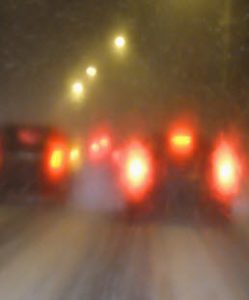 Winter driving is never more perilous than when black ice coats the roads. Mississippi Highway Patrol warns that following too closely on Mississippi roadways can lead to collisions at any time, but particularly when freezing conditions exist.

What is Black Ice?

When the temperatures drop to around 32 degrees on wet roadways, ice forms and takes on the color of the road surface. Hence, the name black ice. Because it is invisible to drivers, it can make for perilous driving. It typically forms on elevated roadways and bridges, making them treacherous for drivers. Additionally, it forms on roads that lack sunshine or that receive sparse traffic. It is most likely a threat in the early mornings and evenings when the sun isn’t around to warm the road surface, but it can be on the road at any time of day.

What to do when you hit Black Ice

When the National Weather Service issues freeze watches, drivers should slow down, especially on bridges and overpasses where black ice is most likely to appear. Although it’s counterintuitive, experts say you should avoid braking when you hit a patch of black ice. Instead, simply remove your foot from the gas pedal and wait for your vehicle to gain footing away from the black ice, or to come to a stop on its own. Black ice will cause your vehicle to swerve unexpectedly, so try to remain calm and try to keep your steering wheel straight to avoid spinning out. If possible, shifting into a lower gear can help.

Black ice can and does result in multi-vehicle collisions when drivers are unable to respond effectively. During one two day period, over 200 accidents were reported on Mississippi roadways during a 2014 ice storm. January of 2017 saw 215 collisions in one day, many of them weather-related. At one point, 50 accidents were being dealt with at the same time. Black ice leads drivers to simply lose control, and when other vehicles are in the vicinity, crashes are inevitable. Other drivers wind up in ditches or snow banks. Your best bet to remain safe is to stay off the roads altogether during a Mississippi ice storm. If that is not possible, the best advice is to drive slowly, keep a safe distance from other vehicles, and stay alert.

If You are Injured in an Accident

If you are a smart, careful driver, that’s half the battle. Sometimes others are not quite as cautious, and you wind up a victim of their recklessness during an ice storm. In the event another driver is traveling too closely or too quickly and crashes into you, the chances of incurring serious injuries are significant. At the Jackson office of Derek L. Hall, PC, The Heavy Hitter, our team knows how to secure the best possible outcomes on behalf of our clients. Your injuries, as well as costs associated with lost wages, may be compensable. Call today for a confidential, free consultation.