Skip Navigation
Home Blog Who is Liable for Your Fall?

Who is Liable for Your Fall? 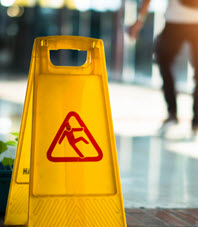 While it’s true that anyone can suffer a fall just because they’re not paying attention or because they’re clumsy, plenty of falls are preventable. That’s right, many times falls are the result of environmental factors that, had they been addressed in a timely manner, would have posed no danger whatsoever. If you’ve experienced a fall that resulted in serious injuries, perhaps consulting with a local premises liability attorney could benefit you.

Any property owner or occupier is responsible for providing a hazard-free environment for people who will be on the property. Otherwise, the courts may determine that negligence was a key factor in the event of an accident, making liability a legitimate issue. In order to determine some level of liability, it must be demonstrated that a hazard that could have and should have been addressed prior to the accident was neglected, which ultimately contributed to the incident.

What is a Hazard?

Common dangers that lead to falls include:

The Centers for Disease Control and Prevention (CDC),reports some disturbing facts relating to falls in this country:

Mississippi has a comparative negligence rule (11-7-15) when it comes to slip and fall accidents. This means that the amount of damages you are eligible to collect for your injuries are directly proportional to the degree of fault you are found to have in the incident. Let’s say, for example, that you were walking along in a hotel hallway while texting. Because a section of carpet has lifted, you catch your foot and fall, breaking your leg. The court may find that the hotel is liable for the fall because it had a responsibility to provide a safe walkway, and the lifted carpet should have been repaired or replaced. On the other hand, you would likely have seen and avoided the hazard had you been paying attention, so the court may determine that you were 25 percent responsible for the accident. Thus, you are entitled to sue the hotel for only 75 percent of the damages.

It’s almost inevitable that, following a fall, a battle over liability will ensue. That’s why you want the heavy hitters at the office of Derek L. Hall, PC fighting for you. Contact our Jackson office today for a free, confidential consultation regarding the circumstances of your case.