Divorce and the IRS 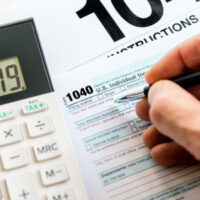 One of the last things that you might be thinking about as you contemplate divorce is the implication the split will have on your taxes. But the truth of the matter is, things are going to change, and knowing the basics puts you in a much better position as you negotiate the terms of the divorce. Having a savvy divorce attorney by your side will make the whole process much easier. So what exactly are the tax issues of which you need to be aware?

You really don’t have a choice as to whether to file as single or married. The IRS says it all depends on the date your divorce was finalized. Anything prior to December 31st means you must file as single, even if you’ve been living as a couple for the majority of the year. On the other hand, if the divorce becomes final on January 1st or later, you can still file as married, even if you lived separately the entire year!

As a rule, the custodial parent gets to claim head of household. However, that status may be transferred to the noncustodial parent with form 8332. Another option for couples whose divorce was finalized before the end of the calendar year would be for an individual to file as head of household if you physically separated before June 1 and continued to pay 51 percent of the expenses related to home maintenance.

Whether you paid child support or received it, there is no impact on your tax burden. It cannot be deducted by the payer, and needn’t be claimed by the recipient.

The rules for alimony depend on when the divorce was finalized. For anyone who divorced prior to the conclusion of 2018, the payer may deduct alimony, while the recipient must claim it. For divorces that occurred after 2018, payments are neither deducted nor claimed.

The important rule here is that no child can be claimed by both parents at the same time. If you have a disagreement as to who gets to claim a child, and you both decide to do it, you are simply asking for an IRS audit. Unless otherwise specified in your divorce decree, the IRS will likely allow the custodial parent to claim the child, assuming one parent has the child for more than half of the time in a given year.

It really is essential to consider all of the tax repercussions on the divorce before signing on the dotted line. The issues discussed here, and others, will impact your finances for years to come. That’s just one reason it’s so important to have the experienced Jackson divorce attorneys at the office of Derek L. Hall, PC working on your behalf. Schedule a confidential consultation in our Jackson office today.