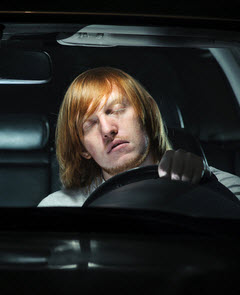 Not surprisingly, the chances of being involved in a vehicle collision are three times more likely at night. The reasons are varied: many motorists experience fatigue after a long day; some drivers suffer impaired vision in the dark; and many young drivers simply are not used to night driving. In fact nearly 60 percent of teen drivers who are killed while driving experience those deadly collisions at night.

Differences Between Driving During Day and Night

Face it: driving in the dark is different from driving during daylight hours. Anyone who gets behind the wheel at night should be aware of the challenges:

Drowsy Driving is all too Common

The statistics are startling: six in ten drivers confess to having been behind the wheel when experiencing fatigue. Nearly four in ten respondents report they have actually have fallen asleep behind the wheel. And drowsy driving is not an isolated incident for many drivers. Thirteen percent of drivers admit to dozing off while driving at least once every month. Over 100 million drivers say they have fallen asleep while driving: if you are one of them, it is imperative that you address your sleep issues. If you have been the victim of one of these sleepy drivers, consulting with an experienced personal injury attorney may be in your best interest.

Avoiding Drowsiness Behind the Wheel

The National Sleep Foundation provides several tips to drivers who battle with fatigue in order to prevent driving while tired:

Pay Attention to Signs of Drowsiness

The mistake many drivers make is to try to keep going “just a little longer” when they feel signs of fatigue coming on. But it is foolish to ignore the red flags that indicate it is time to pull over:

We Can Help You Today

Drowsy driving can lead to serious accidents, often involving innocent people. If you are the casualty of an accident caused by a driver who dozed behind the wheel, the attorneys at the office of Derek L. Hall, PC, The Heavy Hitter, will fight for justice on your behalf. Contact us in Jackson for a free, confidential consultation.