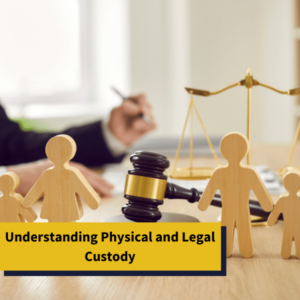 If you and your partner or spouse have separated, one of the most important questions is who will have custody of your children. Custody is often divided into two categories – physical and legal custody – each involving different rights and obligations. It’s essential that you understand the differences between these two forms of custody as you begin determining a custody arrangement for your family. The legal team at Derek L. Hall, PC is here to help.

For over 25 years, attorney Derek Hall has advocated for clients in Jackson and throughout Mississippi. Our team understands how custody disputes affect an entire family, which is why we are committed to handling each case we take with compassion and care. When you choose our firm, you can expect a close working relationship with your attorney, prompt communication, and straightforward legal advice.

To learn more about legal custody vs. physical custody, contact our office for a free initial consultation with a family law attorney in Jackson, MS.

What Is Legal Custody?

A parent with legal custody of a child has the right to make significant decisions regarding the child’s upbringing, such as their education, health care, extracurricular activities, and religious or moral instruction. A parent can have legal custody of their child even if they do not live with them.

What Is Physical Custody?

Courts often prefer for parents to have joint legal and physical custody so that children can have fulfilling relationships with both of their parents. In a joint physical custody arrangement, the child will live with both parents, often splitting their time evenly between the two households depending on the distance between the homes, their school schedule, and the parents’ work obligations. Sometimes, a child will reside with one parent most of the time and visit their other parent on weekends or during school vacations. No matter how time is split in a joint physical custody arrangement, the home where the child spends the most time may be deemed the primary residence for tax purposes or to determine where the child can attend school.

In a joint legal custody arrangement, both parents must agree on parenting decisions that affect a child’s life, such as where the child will go to school, which church they will attend, and other choices that impact the child’s quality of life. A parent can have legal custody even if they do not have physical custody.

How Is Child Custody Determined in Mississippi?

When a court decides a child custody arrangement for a family, the court’s primary concern is ensuring that an agreement serves the child’s best interest. Making this determination requires evaluating multiple factors related to the family’s circumstances, including:

Courts prefer to award joint custody when possible, as custody determinations operate under a presumption that both parents are equally entitled to custody. While some courts previously preferred to award custody to mothers in most cases, this is no longer common practice. Most courts will consider the child’s best interest above all else when making a determination.

How a Child Custody Attorney Can Help

Determining child custody can be complicated, particularly when co-parents do not get along. Fortunately, you don’t have to navigate the legal process alone. An experienced child custody attorney with Derek L. Hall, PC can help you get a favorable custody arrangement for you and your children by:

If you need help with custody issues, reach out to the legal team at Derek L. Hall, PC. Our attorneys can listen to your concerns and advocate on your behalf for a custody arrangement that works for your family. Contact our firm for a free consultation with a family law attorney to learn more about your legal rights.